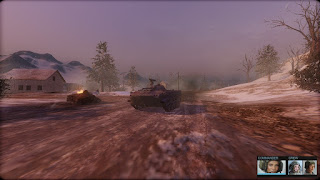 Sabrina Washington had been in enough battles to recognize the difference in sound a ricochet makes, over a penetrating shot. "Dommy, back two," Sabrina yelled into her microphone, in an attempt to be heard over the diesel engine, revved almost to it's limit and echoing through the hull of their vehicle.

Dommy was short for Dominika Volkova, a young blonde woman from somewhere outside Moscow, Russia, who defiantly didn't look the part of being a infantry fighting vehicle driver. However, once she heard the order from her commander, she eased the controls and throttle and reversed the old Soviet BMD-1 beside a large boulder for cover. Although her English wasn't all that great, it matched Sabrina's poor Russian, so another system of communication was established.

They moved just in time too, an enemy shell had struck the other side of the oversized rock, raining down fragments and pebbles from the impact.

"Izzy, target tank, 10 o'clock, load HE." Sabrina called out. Izzy was Isabella Riberio, a delicate looking woman from Seville, Spain, who gave the impression she just escaped from the cover of a high fashion magazine. With two hands of deceptive strength, Izzy grabbed the requested shell from the rack, loaded the cannon and closed the breach.

With a strong Spanish accent, she called out "Up," and started to turn the turret counterclockwise. She spotted an enemy light tank, seventy three meters away and moving towards them. She yelled, peering through the sight, making final adjustments, "Identified."

"Dommy, ahead ten," Sabrina yelled out. Once movement was felt, she gave the order, "Izzy, "Fire."

The BMD-1 rocked not too violently, nor too gently as the round exploded from the end of the cannon. Almost a half an eye blink later, it crashed into the enemy vehicle that had fired on Sabrina and crew, just a few seconds before. The shell punched enough of a hole into the right side to deliver the deadly contents within, transforming that vehicle into a fireball.

The old Soviet vehicle rumbled ahead, with Izzy screaming out, "Confirmed hit." Dommy formed a fist with her left hand and stuck up the middle finger, saying as they passed the burning hulk, "жареный." Sabrina smiled, despite running around the battlefield in an obsolete museum piece, she believed she had the best crew that a commander could get.

"Dommy, ahead fast," Sabrina yelled out, "Izzy, ready up." Just because they bagged a kill, didn't mean the hunt is over for the day.

Posted by Quesnel theGamer at 23:43