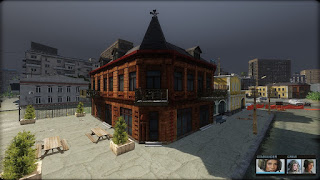 The once organized package that made up the potential candidate offer, had been disassembled and spread out on the coffee table in the living room. From their respective couches, Sabrina Washington and Isabella Riberio were both sitting on the edges of the cushioning and hunched over the table, reading through the now loose pages.

Sitting very much like she had been all day, Dominika Volkova watched her two roommates comb through the papers. She would occasionally glance down at her lap, the tablet was still transmitting a live feed from strategically remote cameras. She had been assured there weren't going to be any future encounters with strangers, that phase of their operation had passed. However, Dominika held on to her suspicions and continued to monitor things.

"It would seem these people are a lot more generous then our former employer," Isabella said, breaking the silence while still reading a page. Sabrina brought her paper down from her face, "I swear, even working at a fast food joint would have paid better than working for that old crotchety fossil."

Dominika gazed at Sabrina, seeing a look of disgust on her face. It must have been part of her own way of reliving her last meeting with Mr. Cowen. As she continued to look at her, she felt happy and safe to be in this room, with both of these women. She hoped they felt the same way about her too.

The story of Sabrina that she had pieced together to this point, goes something like this; she comes from a family steeped in military history, her father had been an electronics specialist in the U.S. Navy, her mother had some clerical job at Naval Base San Diego, back in America. She also recalled Sabrina was the second child of five with an older brother in the Navy, her other siblings were in colleges or universities, with no desire to be in any armed forces.

Dominika was lacking in knowledge about Sabrina's Army experience. She claimed to have scored well enough to get enlisted, passing the battery of tests one has to go through before making out the other side of basic training. The rest of this story has been a mysteriously guarded secret. The only indicator that it wasn't a good time was the once, overheard comment of, "The bastard had it coming."

"Are you feeling left out that we didn't bring any company back for you, Dommy?" asked Isabella, wearing her deadpan, humor face. Dominika responded in kind, "Yeah....lonely." All three women laughed.

Isabella was a person who shouldn't be sitting in this room, Dominika almost thought, once. She had been born into a very wealthy family, her mother was a fashion designer, her father marketed the clothing brand and managed the family finances. She had one older sister who would go on to model the very clothes her family made on the runways of Paris, London and other major centers of the world. Isabella chose not to go down that path, or any other of her family's choosing.

Educated in the very best private schools in Spain, Isabella possessed impeccable deportment and etiquette, but that has been mostly suppressed through a lot of conscience effort. However, she still picks her words carefully before speaking, only on that rare occasion does her mouth speak without her mind's consent. Definitely an awkward moment to be in attendance for.

It wasn't until very recently that Dominika found out why Isabella had left a life where she could have anything she wanted, go anywhere she wanted and do all the same, it was boring. Her life lacked any adventure, no skill testing scenarios, no sense of value from living off money she didn't personally earn. So, she left her comfortable life behind and went down the hard way highway.

Isabella stated she spent a few years learning and living it rough. She enrolled into things like  Keysi Fighting Method, Sevillian Steel and started practicing her shooting skills at the estates of Los Melonares. That was during the summer months, during the winter, she would train and execute her biathlon skills in the Tablón mountain range. All of these activities confused and worried her parents, but she reassured them she would be safe and there was nothing to fear. She had started to become good at lying.

Dominika looked again to Sabrina, she was the leader, without any doubt. Then, a glance back to Isabella, the perfectionist who kept pushing her own limits, without breaking her stride nor missing a shot. Then, gazing down at her two Grach pistols, she was the driver and field mechanic. However, there were a few, unrevealed skills that could come into play, if needed.

When she looked up, two things happened. First, both Sabrina and Isabella were staring at her, smiling. The second thing, a familiar deep, but gentle voice spoke to her. "Family is a cause worth killing for," her dead father said in Russian, inside her head.


Dominika smiled back and replied silently to Dimitri Volkova, "Yes Papa....it is."
Posted by Quesnel theGamer at 07:28