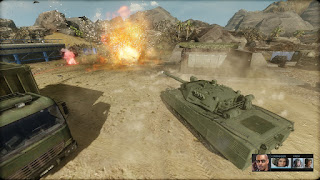 It wasn't the surplus M113 that rushed from the local flora that gave Sabrina Washington cause for concern, it was the M48 Patton that followed it out. A few carefully aimed or flat-out lucky shots from that old 90 mm cannon could prove to be....deadly.

"Dommy, evade back," Sabrina called into her microphone, followed with, "Izzy, target tank, 12 o'clock, load AP." Once Dominika Volkova heard the order from her commander, she eased the controls and throttle, reversing the Italian loaner tank they were currently in, starting a backwards zig-zag maneuver. Isabella Riberio, at the same time, loaded the requested shell, slammed the breach closed and called back, "Up." With the turret already facing the right direction, she just dialed in the distance between them. She yelled, peering through the sight, making a final adjustment, "Identified."

Sabrina ordered, "Izzy, "Fire." With that, the Italian 105 mm cannon thundered a shell towards the old American tank, penetrating through the turret ring, just below the gun mantle and above the driver's compartment. Smoke started to slowly seep out the open wound.

However, the Patton returned fire and the OF-40 that Sabrina and crew were in, shock violently with the impact.  The moment she saw the muzzle flash, Sabrina closed her eyes tight, in an attempt to force her hearing to become more sensitive. She smiled to herself, that was not a sound of a penetrating shot, Dominika had the tank angled just right on impact, a ricochet.

"Izzy, target same, load HEAT," Sabrina called out. Isabella, once again, went through the motions and replied, "Up." Peering through the scope, she lined up the cross-hairs on the first hole produced by the armor piercing round, "Identified." The Patton continued to charge straight towards them, making this almost too easy.

"Izzy, Fire," Sabrina returned and the cannon roared. The Patton exploded, sending pieces of it's turret high up into the air, the HEAT round flew straight and true into the hole and detonated the ordinance inside. The old American tank stopped in it's....tracks. With the tension of that threat now removed, the crew could now clearly hear something that was drowned out and forgotten about, the remaining M113.

"Dommy, evade back," repeated Sabrina, while Dominika continued to work the controls. Sabrina peered through her scope and ordered, "Izzy, target APC, 9 o'clock, load HE." Like an old habit, Isabella went through the motions, "Up," peered into her scope, "Identified."

As the surplus vehicle exploded outside, Sabrina reviewed the very busy past few days they all had. First, after contacting Philipp Holzklau and returning a reassembled potential candidate offer, triple signed, they were whisked away to somewhere in the Middle East. After they were given a rushed briefing, issued a completely foreign vehicle that was optimally crewed by four people, they were set loose on an mock oil refinery to shoot it out with remote controlled enemies.

Over the headphones of the OF-40 crew, the heavily accented voice of Petre Sabri could be heard, "Now....please give me back my tank."
Posted by Quesnel theGamer at 08:25